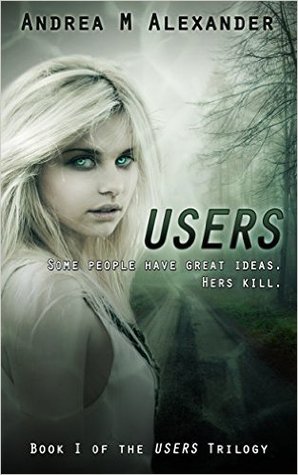 I genuinely enjoyed a lot of the elements of Users. I found the beginning to be really exciting and it drew me right in, with great action and superb and different characters. However, the book to me read a little like two distinct books: one half was out in the world, and the other was in the facility. And, honestly, it didn’t really feel like the two had much of a connection to one another. I wanted to see more of the chaos in the outside world, but the majority of the book focused on the lab–or maybe it just felt that way? Either way, I was hoping for a little more The Walking Dead-style apocalypse encroaching on the characters.

There were a lot of moments where Iggy’s character rubbed me the wrong way, but when I took a step back and remembered that this was, in fact, more of a young adult-style piece, things made more sense. Iggy is young, and made younger still by her years of sickness and being an experimental test subject. Her thought processes probably won’t be as mature as Cael’s. and her responses to certain issues and situations may seem melodramatic because she’s young and, frankly, inexperienced with the world outside of a lab. Sure, she can ride a horse and shoot a gun, but there’s more to a person’s development than that.

While I genuinely loved reading about the development of Iggy and Cael’s relationship, which was so sweet and thoughtful and just CUTE, I found the Iggy/Wesley angle to be a little forced. I can understand underlying feelings, especially when they’ve been best friends and confidants for years and years, but the final explosion between the two of them when Iggy catches Wesley with Alex read a little… off to me. I remember thinking… But what about Cael? You love this guy? What is happening?! Again, I think that’s a bit of the immaturity of Iggy’s character rearing her ugly head in the face of situations where she’s not entirely equipped to handle her feelings.

The ending left us off in a really interesting place, and I hope that, going forward, we can see a growth in Iggy’s character as she gets older and learns a little more about the world. All in all,Users was an interesting book set in a world rapidly descending into a dystopia, and I look forward to reading more from Andrea M. Alexander in the future!

Check out the book on Goodreads for more reviews and purchase links!