Right. So I’m beyond excited to have author Samantha Ferguson on my blog today. If you don’t remember, I had a bit of a mental breakdown reviewing her hilarious and A++ book, The Secret Diary of a Checkout Girl, and I’m really pleased that she signed up to do a little interview with me. Basically because I want to aggressively promote her as much as possible. Because the book was amazing. Did I mention that already?

Anyway. I won’t keep you. Enjoy the wonderful Samantha!

My book is titled, ‘The Secret Diary of a Checkout Girl’, and I self-published it with the help of a wonderful company called CompletelyNovel. The Kindle version was released on October 23rd, and the paperback came out on November 3rd.

The book is written from the perspective of a checkout girl named Suzie Quesnell. Suzie is tired of spending every day doing a job she loathes, so she decides it’s time for a change.

I used to be a checkout girl myself, so whenever anything ridiculous happened (be it good, or bad) I wrote it down on the back of a receipt. It was a great way to vent.

One particular incident that stands out is when I got rotting, out-of-date, cat food all over me. I’ve never known a smell as bad. Naturally, as authors do, I put my poor protagonist in the same situation. It was easier to laugh about it that way.

Before I knew it, I had tons of receipts filled with incidents like the above, and thought, ‘Hey, I could make a story out of these!’

Seeing as this is the first book I’ve ever published, I’ve pretty much felt every conceivable fear. But, because you probably don’t have all night to read this, and because you’re probably not a therapist, I’ll just mention the top three:

In some ways, Suzie and I are very different. She’s cynical, brash, and almost feels like the world owes her a favour. Whereas I am a shy, hard-working, daydream believer.

Then, on the other hand, I can see a lot of myself in Suzie. When I was stuck in a dead-end job and felt like there was no way out, Suzie was the bitter, sad, and lonely person I saw myself becoming.

A direct quote from the book is: ‘I’m not a fan of Halloween. Dressing up like an idiot so you can get a measly bit of cash? I do that for a living’. So she was probably wearing her work uniform and getting quietly, but heavily, drunk in the corner. 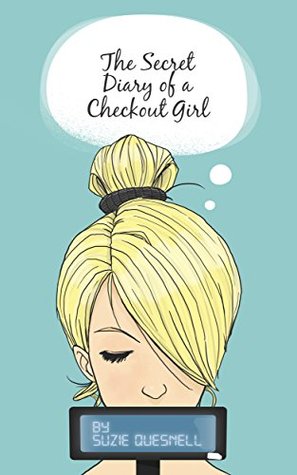 Suzie Quesnell was just a typical checkout girl, until one day she thought: ‘What the hell am I doing with my life?!’
This is the very honest, very secret diary that she used to plot her escape from Eggberts Supermarket.
So, if you’ve ever been stuck doing a job that’s not for you, or, God forbid, you still are stuck doing a job that’s not for you, then read Suzie’s book. Laugh with her, cry with her, but more importantly, change your life with her.

Samantha Rose was born in Blackburn, Lancashire. She has been writing stories ever since she could hold a pen (aged 3). Although, most of these were illegible until about ten years later.

In 2013, Samantha graduated from Edge Hill University with a BA (Hons) in Creative Writing with Film Studies. In 2015, her first novel was published.

Samantha currently resides in the seaside town of Southport, with her partner, Bradley, and their Weimaraner (don’t know what a ‘weimaraner’ is? Look it up, and be prepared for a cuteness overload).